PR: Nadeau’s Changes to the DC Comp Plan Resurrects Redlining of the Past

Washington, DC – In mid-March 2021, at a lightly attended ANC-1C committee meeting, Ward 1 Councilmember Brianne Nadeau's staff introduced for the first time a proposal to upzone parts of the Ward One Adams Morgan neighborhood (these changes have not been mentioned again publicly).

According to analysis of the proposal, Nadeau’s push results in “the unlocking” of approximately $500M dollars of land value/air rights along Columbia Road, NW, that will benefit about ten wealthy white men who own the land there now.

Images produced during a recent community discussion show that Nadeau's upzoning proposal falls along the same redline maps of the late 60's and earlier. 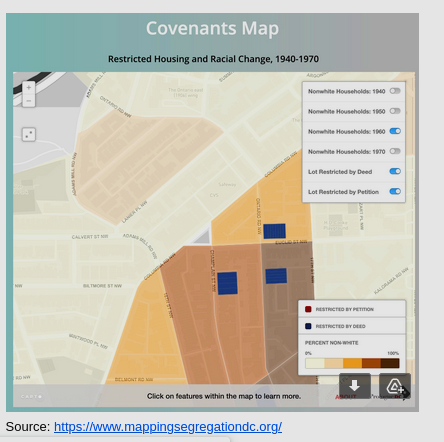 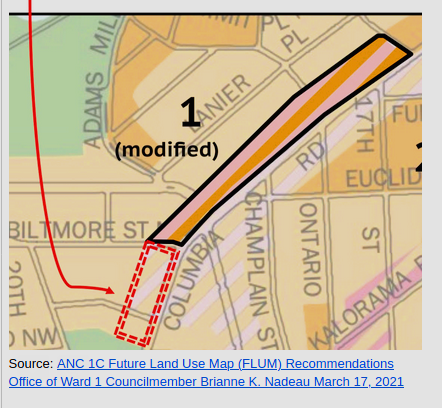 The proposed upFLUMing is on the north side of Columbia Road tracking the exact redline of old, resurrecting the racism of the past especially because of who this upzoning benefits and who it harms.
Recent FOIA’s were submitted to ascertain communications between Nadeau’s office and the landowners who stand to benefit immensely by the changes (see attached).

The Council Office on Racial Equity (CORE) recently evaluated the Mayor's changes to the DC Comprehensive Plan and concluded the proposed changes to the Plan will “exacerbate racial inequities” in the city. Further, while applauding edits made by Council Chair Phil Mendelson to the Mayor's proposal, the CORE report says it's still not nearly enough.

Ward One residents are asking the Council to rescind the planning map amendments as unstudied and are asking for postponement of a vote on the Comp Plan.   Earlier last month, many residents signed a letter asking the all residents get a hance to hear and weigh in on these changes and the impacts be studied.  And more letters from Ward 1 letters have gone in since.

Some say there should be more data available before a vote  to adjust the Plan to identify and contend with any additional harm that has been historically born by working families and residents of color in DC over the past decade, data such as the 2010-2020 Census numbers that will be fully available sometime this summer.