Posted by f2padmin
CM McDuffie Subject of Virtual Protest on Tuesday
FOR IMMEDIATE RELEASE: March 1, 2021
Washington, DC — Ward 5 Councilmember Kenyan McDuffie is the target of an upcoming virtual protest by several Ward 5 groups who are harmed by his refusal to act for his constituents, even declining numerous requests to meet.
What: Virtual protest of CM McDuffie’s refusal to meet and act for his constituents
When: Tuesday, March 2, 2021, 4:30 – 6pm
Where: Register at bit.ly/whereskenyan
Contact:

The immediate reason for the protest is the displacement of Black and Brown residents from Brookland Manor (BM) apartments, the largest affordable housing complex left in DC located between Rhode Island and New York Avenues, NE, in Ward 5. With CM McDuffie’s support, the District has approved a plan by owner and developer MidCity Financial to greatly increase density on the property while greatly reducing the number of affordable units. The DC Council also voted unanimously to award this project a $47M taxpayer subsidy.
MidCity has undertaken aggressive steps to evict and displace BM tenants, including:
Civil rights activist and Brookland Manor/Brentwood Village Residents Association (BMBVRA) President Ms. Minnie Elliott asks: “Where is Kenyan McDuffie and his new racial equity law?  He acts like Brookland Manor is in the past and washes his hands of us. We’re right here, in our homes, fighting for our kids and grandkids, crying out for leaders to defend and help us. We’re demonstrating to be heard.”
Tenants note that a study commissioned by CM McDuffie concluded that the Brookland Manor project would harm Black families. Also, while refusing to meet constituents and help them, CM McDuffie made time to meet and pose with MidCity CEO Eugene Ford Jr.
Other constituents have accused CM McDuffie of neglect and are expected to join the Brookland Manor tenants on Tuesday.  They include the Save McMillan Park Action Coalition and the Howard East Neighbors, all asking for CM McDuffie’s help on Ward 5 problems, including the potential asbestos releases at McMillan Park and endangered greenspace at the Howard Divinity School, respectively. 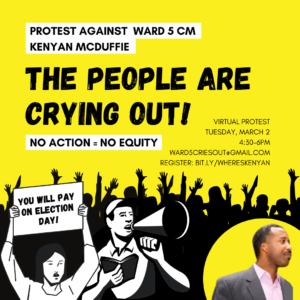