Posted by f2padmin
MORE THAN 115 PEOPLE REGISTER AND ATTEND “VIRTUAL” PROTEST OF WARD 5 COUNCILMEMBER KENYAN MCDUFFIEFOR RELEASE: March 3, 2021
Contacts: Beth Wagner, Organizer, ward5criesout@gmail.com, (301) 800-1497; Ms. Minnie Elliott, BMBVRA President, bmbvassociation@gmail.com, (202) 299-6647
Washington, DC — In what may be a first in DC, Ward 5 Councilmember Kenyan McDuffie was the object of a large virtual protest, with more than 115 registered audience members on Tuesday evening. Ward 5 residents are very angry over McDuffie’s refusal to act on critical issues facing his ward in Northeast, Washington, DC.The Councilmember has refused to meet and otherwise turned a blind eye to:

Tuesday’s “virtual” protest led with families living at Brookland Manor on Rhode Island Avenue, with Councilmember McDuffie supporting the MidCity development plan to increase density of the property, quintupling its value, plus providing a $47 million DC tax gift. MidCity has fenced off the common spaces, including swimming pool and has hired private security to harass residents for being outside, like leaning on fences and other meaningless infractions, which were written-up as “infractions,” and used to evict tenants.

The Councilmember “kicked us under the bus  . . . and he will pay for it at election time unless he changes,” said Ms. Minnie Elliott, President of the Brookland Manor/Brentwood Village Residents Association (BMBVRA).

Regarding the Howard Divinity property, the community is asking that CM McDuffie “use his power to reflect the will of his constituents” to reject rezoning plan and corresponding Comprehensive Plan change, according to Robert Haferd of the Howard East Neighbors.  So far there’s been “no response” to this request from the Councilmember’s office.

The Councilmember has also ignored repeated requests to meet on the McMillan asbestos problem that could impact a large part of Ward 5 and affect the city’s water supply. Residents living nearby the park have sent in complaints to agencies like the Inspector General and Independent Auditor and say McDuffie is conflicted due to ties with the real estate developer class (http://www.tinyurl.com/mcmillanparknews).

In summary, Maurice Cook who helped convene the protest in solidarity with Brookland Manor addressed CM McDuffie directly: “You are making this city unaffordable for … us to have housing … we need you to help us” and alleviate “past harms.” 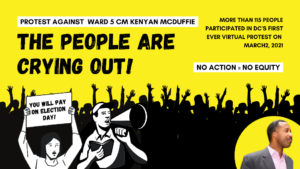